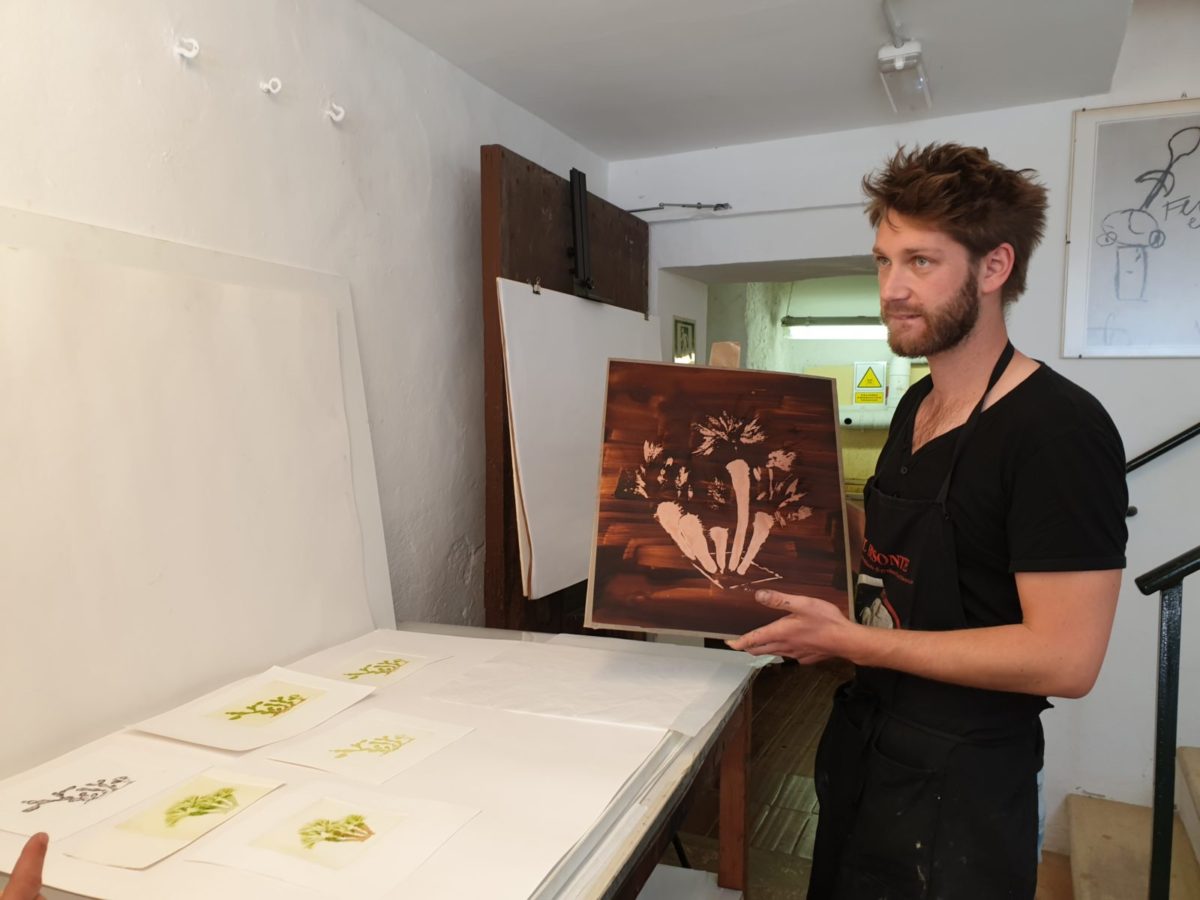 More info about the artist

Sylvain Konyali is an itinerant artist fascinated by the self-portrait. He returns repeatedly (hundreds of times) to the reflection of his face – scrubbed, eaten away by acid, scratched, rubbed out, eaten away again, scrubbed again… This obsessive approach must surely contain a nod to Rembrandt, who, throughout his life, made many engravings of his own face in a wide range of different states, emotions and variants, no doubt fascinated to witness how his features altered with the passing of time. Sylvain Konyali is clearly too young for this to be the aim of the exercise. But the art of printmaking has the specificity of allowing one to preserve the work in progress – which will in fact never be completed – thanks to the printing of states.

Printmaking is often an art of slowness, but it can also involving scribbling, fast etching, and serve as a kind of graphic personal diary to record relationships not only with friends and family, but also landscapes crossed. Sylvain Konyali has journeyed around Europe, through Belgium, the Massif Central, and to Marseille, Madrid and the Balearics, in his truck that is also a mobile printmaking studio. Etching is also often an art of the series – there are countless series in the history of this medium. Sylvain Konyali has understood very well the possibilities of creating wordless stories or short poetic texts as counterpoints to images engraved and printed in haste, or even texts engraved into the copper. This process calls to mind the works of one of his predecessors – also a resident at the Casa de Velázquez – Alexis de Kermoal (1958-2002), who also composed a subtle, imaginative personal diary (of texts and images) on metal. One also thinks of Jules Pascin (1885- 1930), whose whole life is depicted in his delicate drypoint prints. And then there is the Belgian artist Stéphane Mandelbaum (1961-1986), whose portraits – which are often self-portraits – evoke Francis Bacon.

These personal pieces about himself and his nearest and dearest have not prevented Sylvain from soaking up something of Spain (and its museums) and making some wonderful discoveries – such as Sofonisba Anguissola (1532-1625), a talented portraitist who, in the course of her long life, made many self-portraits and is one of the very few women artists whose works hang in the Prado. These Spanish experiences and discoveries have opened up a new field for him to explore, as well as providing the opportunity to move away from the face-to-face, or “passport format”, as he himself refers to his work.

In August 2019 Sylvain Konyali was selected for the residency at Miró Mallorca Foundation, coming from Casa de Velázquez (Madrid), for a project that permets him to introduce color in his works. As he said “working with Joan Oliver was a reel opportunity to improve a new technique (soft aquantint etching) and to learn to print with different color on the same paper. It has been a reel experience and a precious time to work in this wonderful place and studio, surrounded by Miro’s drawing painting and drawings on the wall”